Qualifying for the U.S. Olympic golf team: How to do it and Tiger’s chances

The men’s Olympic golf tournament is still six months away, but Americans, including Tiger Woods, trying to grab one of the four spots available in the 60-player field are already in an intense battle to get to Tokyo, where the competition begins on July 30 at Kasumigaseki Country Club.

Here are some key facts and dates as they relate to making the 2020 Olympic tournament:

How many players will the U.S. send?

Up to four. The top 15 players in the Official World Golf Ranking will be eligible, with a limit of four players per country. There are currently nine Americans ranked among the top 15, so clearly a highly rated U.S. player who is capable of winning Olympic gold will not be competing.

How is the rest of the field determined?

Strictly based on the OWGR as of June 22, which is after the U.S. Open. Any country can have up to four players if they are among the top 15 in the world, with no more than two per country if they are ranked lower than 15th. Because of this, players well down in the world rankings will qualify. For example, as it stands now, the 60th player in the field would be Fabian Gomez of Argentina, who is ranked 242nd in the world.

What is the qualification period?

Because the OWGR operates on a two-year cycle, the qualification period began July 1, 2018 — the last day of the Quicken Loans National on the PGA Tour. All points earned at events from that point through the 2022 U.S. Open comprise the world ranking on a given day and the list from which the field will be determined. That is why the OWGR today does not mirror the projected ranking as of June 22: Any points a player earned prior to July 1, 2018, will not count toward Olympic qualification, but those points are still part of the two-year cycle now. That is the rolling nature of the OWGR. For example, Woods has depreciated points for his second-place finish at the 2018 Valspar Championship and tie for fifth at the 2018 Arnold Palmer Invitational. They will no longer be part of his record after the dates of those events pass in 2020.

How does qualifying differ from the Ryder Cup or the Presidents Cup?

For United States players, the world rankings are not a determining factor for either competition. Players earn points based on money earned for the Ryder Cup and based on FedEx Cup points for the Presidents Cup. European Ryder Cup players have a points list that factors in money earned on the European Tour, as well as a world list based on the world ranking points earned during the qualification period.

If the Olympics were today, who would be playing for the United States?

No. 1 Brooks Koepka, No. 4 Justin Thomas, No. 5 Dustin Johnson and No. 6 Tiger Woods. But the rankings are volatile and there are numerous players in position to earn a spot. Patrick Cantlay is seventh in the world. Xander Schauffele is ninth. Webb Simpson is 11th and Patrick Reed is 12th. Gary Woodland, Tony Finau, Bryson DeChambeau and Matt Kuchar — who earned Olympic bronze in Rio in 2016 — are all ranked in the top 20.

Tournaments such as the Genesis Invitational, Arnold Palmer Invitational and the Memorial will also have loaded fields offering more points.

So what are Tiger’s chances?

Good, but he is far from a lock. The good news for Woods is that he is not in danger of losing points by playing events. That can happen to players who compete often. The OWGR formula is based on average points, which is computed by taking the total number of points earned and divided by events played. But the minimum divisor used is 40 events played over two years, a number Woods will not come close to achieving. Anything over 40 is the number used to divide, so the average number can decrease if an appropriate number of points are not earned.

Here’s the bottom line for Tiger: He’s in position, but with so many big events, he will need to produce. A victory somewhere would go a long way toward qualifying, but so would several top-5 finishes. And he is looking at playing events with strong fields, so high finishes would help even more. His tie for ninth on Sunday at the Farmers Insurance Open earned him 6.75 world ranking points, but he probably needs to average about 15 points per event to be assured of an Olympic spot. And the points drop off drastically after the top 10.

Woods can be expected to play between eight and 10 more tournaments prior to the cutoff.

Look at old videos of the best swings of yesteryear, and you’ll likely see the golfer’s lead knee move toward the ball during the backswing. At the same time, the lead leg’s foot would roll inward and the heel would come off the ground. For the most part, it’s become a thing of the past. With more emphasis now on fitness and strength and swinging the club from a solid base, the best players really stabilize their lead knee (left for right-handers). They use it as an anchor to wind against as they load into their trail side. Even for amateur golfers of limited physical ability, consistency and power immediately improve when that knee is relatively still during the backswing.

My associate J.J. Rivet, one of the world’s leading biomechanists, says his testing has shown that the lead knee of a modern tour player moves toward the ball no more than 8 degrees. In many cases it barely shifts. Amateurs, however, let the knee move as much as 35 degrees during the backswing. You can’t coil properly with a power bleed like that.

A drill to train better stabilization of this knee is to make one- handed rehearsal backswings while preventing the knee from moving with your other hand (above). You should feel pressure in the toes of your lead leg and the heel of your trail leg as you reach the top of the swing. It’s perfectly acceptable for the lead heel to raise as long as the knee moves slightly toward the target, not inward. —WITH RON KASPRISKE 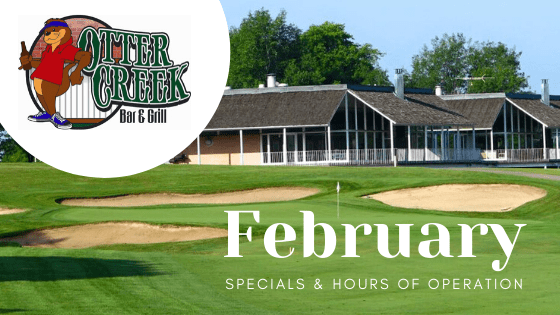 Did you MISS US? WE’RE BACK!

*If the golf course opens, grill hours will adapt accordingly

Join us for an amazing dinner!
Saturday, February 1st, 2020

Come out for dinner and enjoy ½ price appetizers.

Try our latest additions to our dinner menu!

WE KNOW HOW MUCH YOU LOVE OUR BRUNCH!

Brunch will be available every other Sunday!

FOR THE ONE YOU LOVE · VALENTINES DAY SPECIAL
Friday, February 14th – 5 pm to 9 pm

Your Special Selection of…
6 oz. Filet
10 oz Strip Steak
Seafood Stuffed Salmon
served with a Baked Potato or Roasted Potato and Seasonal Vegetable
Salad and Bread served with all entrees
End your evening with a Delicious Dessert! 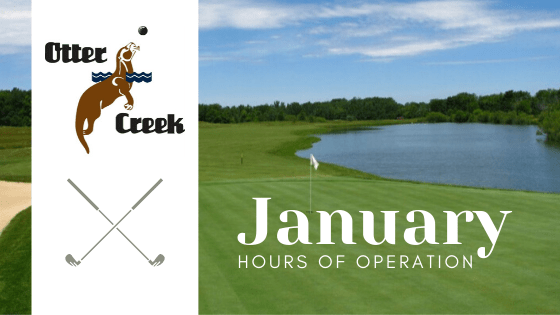 Golf Course
Weather permitting & the temperature is 40 degrees or above, the golf course will open on a day-to-day decision.
Please call the Golf Shop or visit the website for those daily decisions. 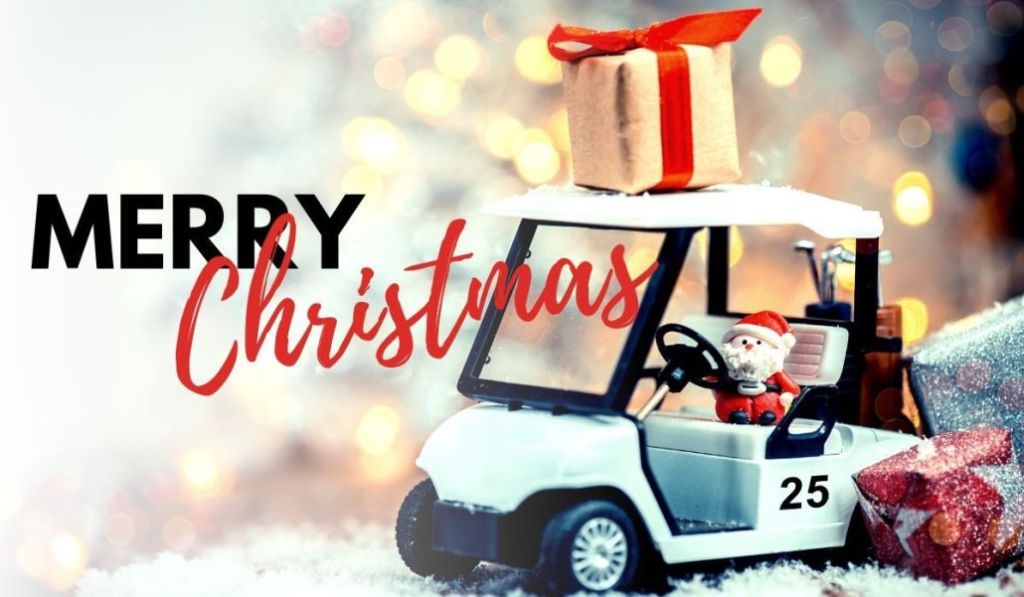 Merry Christmas from everyone at Otter Creek!

We wish you and your family a safe and happy holiday!
We look forward to seeing you in the new year!